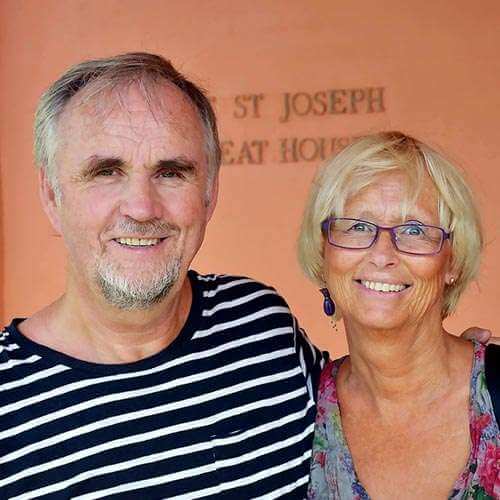 Norwegians Olav and Unni Slatten learned how fully Father-God had poured His love into their hearts when they were beaten and left bleeding in an African slum.

After an evening session at a pastors’ conference in 2005 in the Kibera slum in Nairobi, Kenya, the Slattens decided to walk the quarter mile from the conference site to a flat where a meal awaited them. On the way they were attacked and robbed by about eight men, says an account in the book “The World’s Greatest Revivals,” by Fred and Sharon Wright, then the international coordinators of the Partners in Harvest network based in Toronto, Canada.

Unni “was gripped around her throat so hard that she passed out,” says Olav’s first-person account in the book, and he was struck in the face. Their injuries required treatment at a hospital.

Afterward, “all we could do was to bless and forgive those who had attacked us,” Olav said in the published narrative.

In the days that followed, Olav asked God why he and his wife had suffered the beating. God’s answer was, “I wanted you to know what was in your heart.”

What had emerged, the Wrights wrote, was “the fruit of all the time and effort that Unni and Olav have spent learning to dwell in the Father’s love.”

Speaking about that love has become the Slattens’ primary focus.

Olav grew up in Gjovik, nearly two hours north of Oslo and where he and Unni have settled. Unni grew up in the southern coastal city of Kristiansand, fostering her love of the sea. Both became leaders in the Jesus Movement in their country.

From 1979 to 2013, the Slattens pastored a church, where they retain leadership roles. Olav, who has degrees in education and theology, also had a thirty-five-year teaching career. Unni studied accounting.

The Slattens were introduced to the father heart of God through “The Father’s Blessing” revival in Toronto. Unni attended a four-week school there in 2003 that featured James Jordan, Jack Frost, Ed Piorek and Peter Jackson as the speakers. Also, James came to the Slattens’ area of Norway to speak and returned there about every six months. Eventually a Fatherheart Ministries school was held at the church the Slattens were leading.

Olav had desired to better understand his Toronto encounters with Father’s love, and found that James and his wife, Denise, “put words to my experiences.” He sensed Father speaking to him, “I’m taking you home, son.”

He and Unni began leading Fatherheart schools themselves in 2007. They’ve had roles in presenting schools throughout the world, including Norway, Denmark, Sweden, Finland, Kenya, Uganda, Ghana, Liberia, Canada and Brazil.

They also run a farm they purchased in 1991 where they’ve had sheep, chickens and a horse.

The Slattens raised five children, all boys, and have nine grandchildren.

Olav enjoys fishing, walking in the mountains and forests, and camping. Unni also loves outdoor activities, including mountain walks, as well as gardening and being with animals.